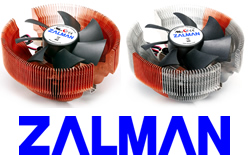 Other products by Zalman

Zalman's famous "super flower cooler" makes a surprise re-appearance for 2009. The original design has been updated, made lighter, slicker and with its best pricing ever. It is now a "one for all sockets" design, meaning the same cooler can be used on your Intel (775) or AMD (AM2/754/939/940) processor. As you would expect, the CNPS7000C operates virtually silently at its minimum fan speed setting, but yet offers excellent cooling. Its 92mm fan is completely enclosed in the heatsink fan arrangement, making the cooler easy to install.

It is available in two versions - the Cu version is made entirely from copper and gives best cooling albeit at an increased weight and cost. For those who prefer a lighter cooler (especially if the PC will be frequently transported), the AlCu version uses a mixture of aluminum and copper fins, and gives an excellent balance of cooling versus weight and price.

1. The computer system may automatically shut down when booting the computer after the system monitoring program outputs a warning stating that the CPU fan is rotating slowly. In such a case, fully turn the Speed Control Knob in the clockwise direction before rebooting to disable the 'CPU Fan Detected' option in BIOS, or set the CPU fan's rotational speed to 1,350rpm or lower in the system monitoring program. Note) Some motherboards fail to boot if the rotational speed of the CPU fan is below a certain rpm. However, booting can be possible even at low fan rpm if the BIOS settings are updated. For more information on updating the BIOS, please refer to the website of the motherboard's manufacturer. There are motherboards which fail to detect the rpm while operating the cooler in Silent Mode, but this does not affect computing performance.

2. Excessive force exerted on the fan may damage the fan, resulting in damage to the system.

3. Zalman Tech Co., Ltd. is not responsible for any damages resulting from CPU Overclocking.