Other products by Zalman

This clever cable solves two problems in one. At its simplest level, the cable allows you to connect multiple 3-pin fans to one 4-pin connector from the PSU. This is useful where you wish to install one or more 3-pin fans but there are no available 3-pin fan header sockets available on the motherboard.

In addition, it gives you a choice of two operating speeds for your fan(s), by allowing you to run your 12 volt fan(s) at 5 volts if desired. This has the effect of slightly reducing the speed of the fan, and significantly reducing the noise. Although the airflow will be reduced, this rarely has a large effect on case temperature.

You can see from the above diagram that two outputs are provided at 12 volts, and two outputs at 5 volts. Therefore you can have up to two fans running at normal speed (black sockets), and/or up to two fans running at a lower speed (white sockets). Either type of output can be used in combination with a Fan Mate to give an even greater degree of control over fan speed.

As well as the benefit of low noise, running your fan(s) from the black sockets will increase the life of the fan, and reduce dust buildup. The cable comes attractively retail boxed with instructions. Note: This product does not allow you to connect a 4-pin fan into a 3-pin motherboard fan header socket. 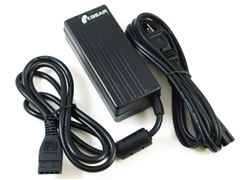